The new and simple GPS location for everything that can be moved!

Stop bee theft! Protect your bee colonies effectively and unobtrusively from theft with the BeeWatch® Tracker! SMS alarm when the hive is moved!

You can take action immediately.
The current GPS position is always on your mobile phone. With Google Maps/Earth, you can determine the exact location of the hive and find your lost bee colonies – wherever they are in the world. 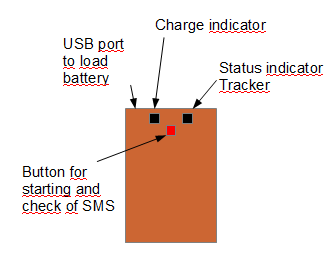 Connect the BeeWatch Tracker via USB cable to your PC, smartphone charger or PowerBank. While charging, the LED next to the USB port will light up. The initial charging operation may last up to 6 hours, depending on the energy source. When the LED is no longer lit, remove the battery charger.
The LED “Status Indicator Tracker” indicates, among other things, the status of the SIM card and access to the telephone network. When the BeeWatch Tracker is active (switched on) the LEDs are no longer lit in order to save energy.
If the LED “Status Indicator Tracker” light stays on, this signals a missing/defective SIM card or a PIN-protected SIM card.

Attention: Please note that contact to satellites is limited indoors, and it can be difficult to determine the position.

If the BeeWatch Tracker is in the transport mode, the Tracker needs to be “woken up” by pressing a button. Please press the button until the status LED turns off by itself. 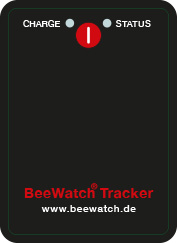 The BeeWatch® Tracker is a highly efficient and at the same time unobtrusive device, which can be hidden in the hive to effectively protect against theft.

If the hive is moved, the BeeWatch® Tracker will send an SMS ALARM to your mobile phone. After this first SMS ALARM, the so-called Tracking Function comes into force, notifying the beekeeper of the current GPS coordinates every 30 minutes via SMS and thereby indicating the current position of the hive. Other time intervals are individually adjustable via SMS.

It is then possible to track the position using Google Earth or Google Maps. If the stolen bees reach a final destination, you can determine the final position very accurately. Ideally, you can narrow down the final coordinates to the nearest 10 metres, anywhere in the world, to succeed in finding your missing bee colony again.
The battery has a life of about 180 days and can be charged at any time through a USB cable using a laptop, power bank or a cigarette lighter in a car.

The Tracker requires a credited SMS-enabled SIM card. When carrying out controls of your bee colony, you can shut the Tracker down via SMS message. The BeeWatch® Tracker automatically turns off after 50 minutes and returns to the monitoring state.